This is the origin story.

All plans of action start with an idea. My plan, in short, is this: Spend one month in Vietnam. Write. Learn. Absorb. Document. Oh sure, and Eat, Pray, Love, as appropriate. Pay particular attention to fish.

The idea for this plan, such as it is, goes back to the time when I first started writing. As an undergraduate working at the UC Davis News Service, I interviewed a professor who studied the economics of sustainable agriculture development in the Amazon. He told me about a “critical triangle,” the intersection between poverty, the environment, and economic development. Trying to address any one point of the triangle required tradeoffs from the other two points. But was there a way to strike a balance, one that could benefit both people and the natural world they depend on for survival?

Something about that question spoke to the core of what I believed in. I kept circling back to it while wondering what to dedicate my life to. I took the story of the Amazon, filtered it through my values, and came out with…fish. Because of all the world’s amazing ecosystems and habitats, the one I care most deeply about is the ocean. And nowhere is the relationship between people and the ocean more tangible than the fish they catch to eat, sell and survive.

Fish brought me to graduate school at Moss Landing Marine Laboratories. I learned to catch them and dissect them, learned how they lived and what they ate, learned different approaches to managing them.  And it was at a graduate student workshop (sponsored by the excellent MARINE program), where I started thinking about what how to turn fish, the ocean, and the critical triangle into a life plan. What would be my Amazon?

One of the many exercises of this “Designing the Professional” workshop was to map out three different possible life paths immediately following graduate school. Three different tracks we could envision our lives taking. The workshop host, Stanford instructor Dave Evans, called it our personal odyssey. I took the exercise to heart, and concluded that for one of my paths, my Amazon would be Vietnam.

Here it is worth mentioning two things: 1) My mom is Vietnamese, making me half Vietnamese. 2) I don’t speak Vietnamese, but wish I did.

Suffice it to say, trying to learn Vietnamese has been one of the greatest personal challenges of my life. It’s the result of garden variety multicultural identity issues, and a highly Westernized tongue mangling the nuances of a tonal language. Was there a way  I could integrate my longing for a key cultural connection into the study of fish? I threw it all in the mix, and came out with a timeline with different “seasons” for my path that looks like this:

I hung this on my wall for the past few years as a sort of personal compass. As a result of the workshop, my crazy pipe dream seemed less crazy and almost, well, doable. Three different seasons building up my knowledge of language and culture, of people and nature.

And suddenly, I now find myself racing through Season 1, about to hopscotch through Season 2, and ready to land in Season 3. This trip, which starts today, is turning my plan into action.

I admit, my intensive Vietnamese-study-as-preparation hasn’t been quite as intensive as it could be, although Mom has been inserting more Vietnamese into our conversations of late, which is nice. Hopefully I will be learning a lot on the go. Which reminds me to pack my pocket dictionary.

I’ve also skipped over the whole teaching thing, but with any luck there will be kids and schools on this path yet. My inner elementary school teacher will be scoping out the possibilities. Extended family and language immersion are still part of the plan, since I’ll be staying with my Mom’s cousin and his family. And Season 3 will come about largely thanks to my new job – but more on that later.

As part of the personal odyssey exercise, Dave Evans also instructed us to design a talisman, something to remind us of our favorite path. Hence, I created this stunning piece of Clip Art: 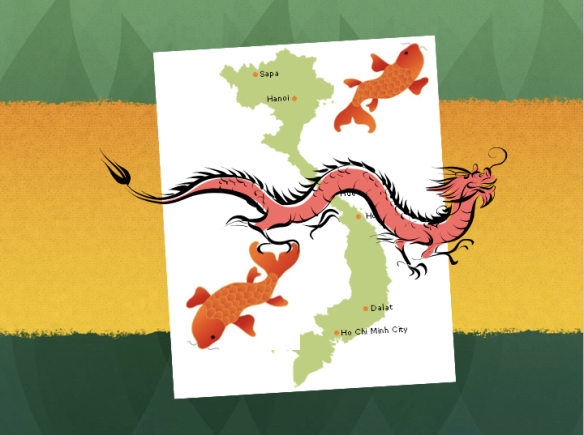 I wrote this about it:

This is my talisman. I’m calling this plan the Dragon Fish path because the dragon is an important figure in Vietnamese mythology, and the country itself is said to look like a dragon. I also think I will need to draw on some of that mythological strength and determination to actually carry this plan out. Fish are my area of study and I was drawn to them because they embody the intersection between people and the ocean. So this plan is a bit of melding between my personal background and my educational path.

Fast forward to my most recent round of schooling, a year at the UC Santa Cruz Science Communication program. Enter another assignment, this time to write a book proposal – something I could see myself writing in the next five or ten years. With the Dragon Fish path still on my brain, I again took the assignment to heart.  My proposal starts like this:

The country of Vietnam curves like a dragon sleeping at the edge of the sea. Green, jungle-covered mountains armor its head and spine, and the fertile fan of the Mekong delta spreads across its tail. This slender country and the great ocean it borders host a lush richness of tropical flora and fauna. However, Vietnam’s natural heritage remains obscure to the western world, overshadowed by the human tragedy of war that ripped the country apart, and defined it for a generation of Americans. Nearly four decades later, Vietnam has one of the fastest growing economies in the world, and the country’s environmental resources are under siege. I propose to write an ecological travel book that highlights the country’s threatened natural diversity in its ocean, rivers, and jungles, and examines the relationships between the Vietnamese people and their natural environment.

And why should I be the one to write this book?

This book is a subject of great personal and professional interest to me, one that draws on my cultural heritage and scientific training. Vietnam is my mother’s lost country: she and her family fled at the end of the Vietnam War. Growing up, my relationship with Vietnam has been colored predominantly by this loss. I am also trained as a biologist and marine scientist, with a particular interest in fish. I am fascinated by the relationship between people and their natural environment. This rare combination of characteristics makes me well poised to write the book I have proposed. I have met few other marine or environmental scientists of Vietnamese heritage in the United States. The book’s exploration of nature, culture, and conservation will offer a new perspective of Vietnam not just for readers, but also for myself. I have struggled to improve my rudimentary Vietnamese for years, but as a science writer, I can approach the country through the language of fish and oceans, of mountains and trees.

I originally started planning my upcoming trip primarily with this book in mind. But since then, my path has crossed with the company FISHBIO. With them, I will have the opportunity to immerse myself in the critical triangle of the Mekong Basin, both as a writer and as a scientist. My journey over the coming month, part personal, part professional, will be my first foray into acting out my plan. A book is very much part of my end goal, and this blog will be one way of encouraging me to write in the coming weeks. Thank you for reading – I welcome you to take this journey with me. I hope this is only the beginning.

7 thoughts on “The Dragon Fish Path”