One of the best parts of traveling is meeting other travelers.  It’s fascinating to talk to other people who have converged from all over the world to visit the foreign place you also happen to be visiting. And sometimes it feels good to meet people who remind you of home.

I didn’t meet as many travelers on this trip, since I stayed with family for the most part, not at hotels and hostels where these kinds of interactions spring up. But one of the highlights was getting to know Ashley and her husband James, thanks to the Halloween party at the hotel I stayed at in Can Tho.

The other hotel guests were mostly Europeans (Germans, Dutch, Danes), who take their world travel pretty seriously, and seem to flock to Southeast Asia in much greater numbers than Americans.  I told someone I studied fish, and he mentioned there was another researcher somewhere at the party.  Instantly, my science radar perked up, but in the midst of flip cup and apple bobbing and “Gangnam Style” blasting over the speakers, couldn’t figure out who it was. 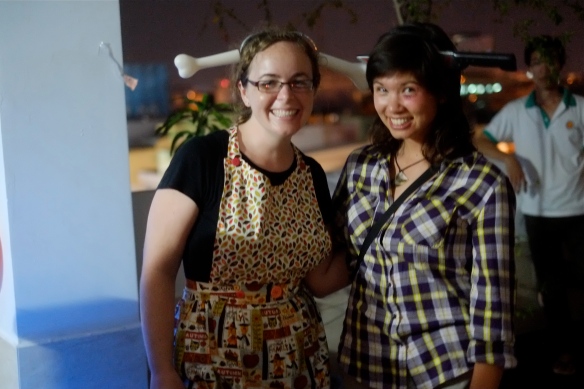 Then at the end of the night, I finally bumped into Ashley and learned that she’s a Ph. D. candidate in Environmental Engineering from Duke University.  She’s already done research in Haiti, and is in Vietnam on a Fulbright Grant to study wastewater treatment with researchers at Can Tho University.  Sweet.

It felt amazing to talk to someone else about the country through the lens of science. To commiserate about her challenges trying to get research supplies and navigate the university bureaucracy.  To express our mutual frustration about the things that shocked us, but that we didn’t know how to change—like the coffee shops that have monkeys tied up outside with tight chains around their necks. And to find someone who understands just how agonizing it can be trying to speak the language. 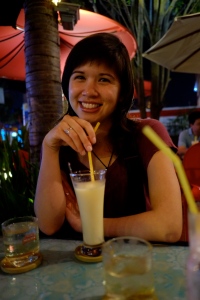 I became a regular at this cafe – ordered the mango smoothie three times in one week! (photo by Bao Quan Nguyen)

In Can Tho, Ashley and James took Quan and me try their favorite meal – a vegetarian dish called bun kho. It’s a version of one of my favorites, with vegetarian spring rolls, and some kind of soy protein instead of pork — I  didn’t even miss the meat! In return, Quan and I took them to Café Queen, where I have discovered what I’m pretty sure is the best mango smoothie ever.  Of course, when we got there, it turned out there was a power outage, so they couldn’t make anything that required a blender.  We ordered yogurt instead and joked that maybe we could wait it out until the power came on. And in the course of talking over a few hours, that’s exactly what we did—smoothies for all!

It’s an easy bus ride from Can Tho to Saigon, and Ashley and James sometimes come up to the city for the weekend.  I had fun meeting up with them for an afternoon.  We got some good food at Givral and visited the Ho Chi Minh City Museum. I enjoyed having some buddies to play tourist with!

So here is the super small world part: in North Carolina, these guys live in Cary, the town just west of Raleigh—where I just happened to spend the first two years of my life. I was technically born in Raleigh (where the hospital was), and I’ve never been back to either place. I may have to change that…Fancy meeting them on the other side of the world.

While my cultural immersion was short and sweet, these guys are the real deal – they’re living in Vietnam for 10 months.  You can check out Ashley’s blog to keep track of their ongoing adventures (like this interesting post on culture shock). Good luck, you two, I’ll be thinking of you!

1 thought on “Americans in Vietnam”