Just two hours after my plane touched down in Laos on Wednesday, I was in a van on the road to one of our project sites. I had been able to time my trip with a visit from a representative of our project donor, who wanted to assess the project in the field. With barely time to repack my things, and definitely no time for a shower, I ate a quick lunch of fried tilapia, sticky rice, and papaya salad with my Lao colleagues at the office, and then we were off. The weather was cloudy and cool, like I was right at home in Santa Cruz. Just minutes into our three-hour drive, it began to rain – hard. I worried that tomorrow’s rainy forecast didn’t bode well for our field trip.

The paved road turned to bumpy dirt as we got closer to our project site. We were traveling east of Vientiane. On the other side of the river was Thailand, with hills shrouded in rainy mist. I saw rocky islands and green plants in the Mekong River for the first time – I had seen photos of these from my colleagues who had visited the project site, but had never seen them for myself. I had only seen the river as wide and flat and brown. When we reached the town of Sanakham, the head of Sanakham District in Vientiane Province, the rain had stopped, leaving puddles in the reddish brown mud of the roads. I was bundled up in all the layers I had brought, thinking it strange to feel so cold in Laos. While I think I prefer the cold to the heat, I was thinking about what my grandma had said about the cold in Hanoi, Vietnam – a damp cold that cuts to your bones. It feels impossible to get warm in such conditions, but I asked for any extra blanket at our guest house, and slept in several layers, which helped a lot.

Ant larvae for sale in the market

Mud after the rain

The next morning we ate noodle soup at a streetside restaurant. The smell of the wood burning fires and the coolness of the morning reminded me of camping. As we left, one of my colleagues approached a black mynah bird in a cage with striking yellow feathers around its eyes. He said “Sabaidee,” or “Hello,” in Lao. The bird answered “Sabaidee,” in a deep, eerily human voice. It could also say “Do you want to buy some beer?” in Lao. It’s pretty common to see beautiful birds in cramped cages in Southeast Asia. I was amazed at the bird’s mimicry, but also sad to see it reduced to a party trick.

Our first stop the district governor’s office for a meeting about the Fish Conservation Zone, or FCZ, our project helped establish in the area. The district deputy said they had tried to create Fish Conservation Zones with local communities in the past, but these efforts didn’t really succeed because of a lack of training and outreach for the communities to understand and enforce the rules of the no-fishing zone. He hoped that our project, for which we held many meetings and trainings, could become a model for other villages. 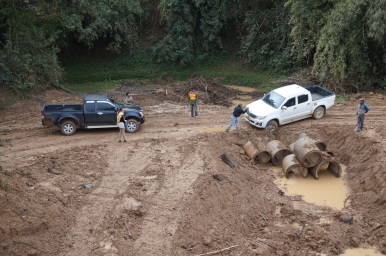 Getting a truck unstuck

Trucks may get stuck, but not this tractor

By this point, the rain had stopped, but as we headed toward one of our four project villages that shared management of the FCZ, we realized it wouldn’t be a smooth ride. A new bridge was under construction, with piles of rocks blocking the entrance on either side. A dirt side road skirted around the bridge, but a truck had gotten stuck in the mud at the lowest point, blocking the way. Trucks were backed up on either side, and a small crowd of spectators stood on the bridge, watching and commenting on the effort to get the truck unstuck from the mud. A steam shovel arrived and began clearing the rocks to open up the bridge. The local fisheries office offered the use of their truck, since our van had to wait for the bridge to be cleared. I was worried that our project plans would be foiled, but after an hour, we were on our way. It was a good reminder to me that when working in countries like Laos, just getting to the project location is a small victory in itself! 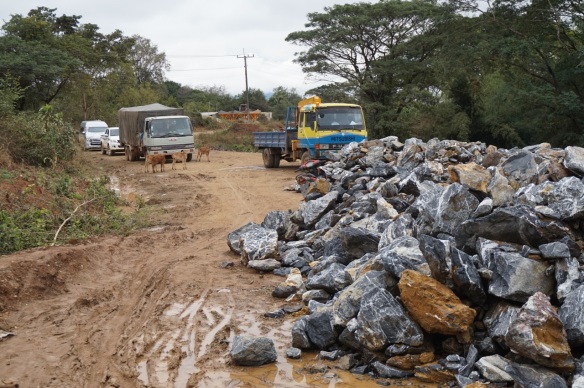 1 thought on “Over the Bridge and Through the Mud”