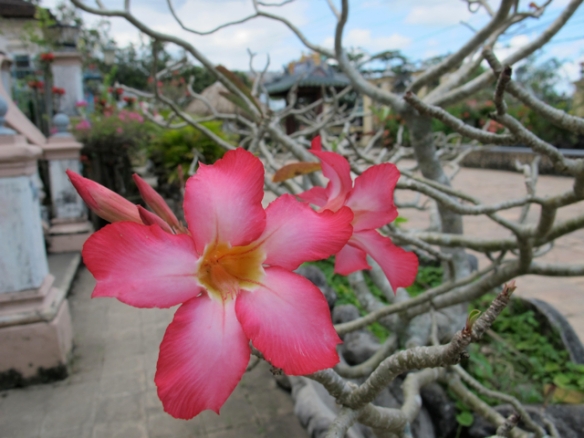 I fear that from this point forward, my blog will be pretty far from chronological and anything near “real time,” but such is the tricky balancing act of travel writing: trying to do noteworthy things, and finding time to actually write about them.

As a quick recap of my roughly four weeks in Southeast Asia, my first week included a trip to Can Tho in the Mekong Delta, followed by a week in Ho Chi Minh City, and a weekend volunteer trip to the outskirts of Long An province west of the city. I travelled to Laos last week, and am now back in Ho Chi Minh City for my last week. 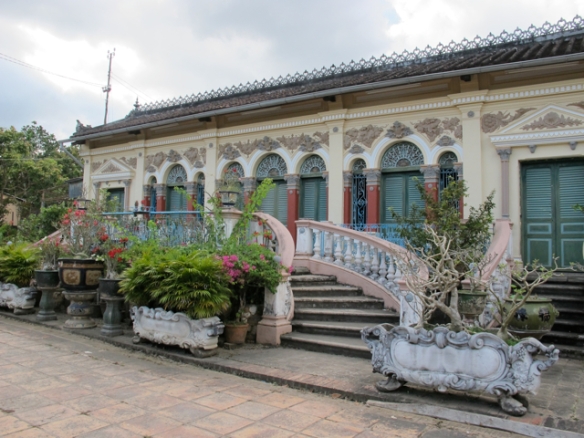 I want to circle back to my week in Can Tho to write about one of my favorite sites, something a bit off the beaten track. Our hotel listed a few local attractions worth seeing besides the famous floating markets, and among them was “Binh Thuy Ancient House.” Something about the name intrigued me, so my cousin and I rented a motorbike on a free afternoon and, armed with a map, traveled to the general vicinity about 15 minutes outside of town.

Not knowing exactly where the house was, we pulled over at a pagoda that looked promisingly ancient to see if it was our destination. My cousin asked an old woman selling food outside the gate, and she waved her hand vaguely at a road across the street, as if shooing us away. “She says it’s that way,” my cousin reported. As we made our way down the narrow street, lined with vendors and shops, I started doubting the accuracy of our less than detailed directions, certain we’d never find it. 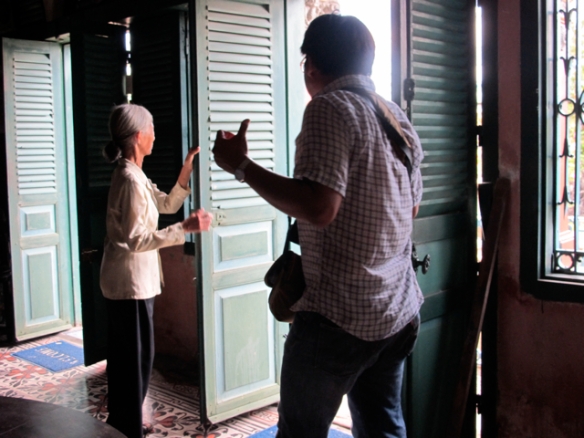 But the house was in fact on that street, though we drove past it once before we realized it. The large blue iron gate was closed, except for a side panel wide enough to ride a motorbike through. I expected at least a sign. The beautiful tile courtyard was empty. My cousin talked to some workers doing some repair on the side of the house, then parked the motorbike and headed around to the other side of the house. I followed him, assuming we were in the right place. We rang a doorbell and peered through a screen door into what looked like someone’s darkened kitchen. After some time, an old woman appeared, spoke to my cousin briefly and shut the door. 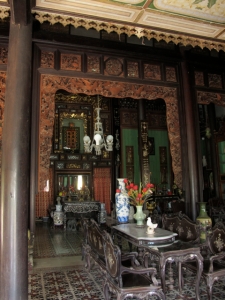 “It’s closed, isn’t it?” I said. But no, she was simply unlocking the main room for us. Stepping through the green shuttered doors into the dim interior felt like entering a long unused room in a mansion from the Secret Garden—or maybe the big library reveal scene from Beauty and the Beast. As the woman opened one pair of shutters and then another, a high-ceilinged room slowly appeared out of the darkness, crammed with breathtakingly ornate artifacts from another time.

I suppose “ancient” is a relative term for describing the house, which was built in 1870 and remodeled to its current state in 1911. The inside revealed a blend of Eastern and Western styles. Tile floors, beaded chandeliers, carved hardwood chairs and tables, ceramic vases, wooden wall panels with exquisite mother-of-pearl inlay. Carved ivory tusks of an elephant long dead. Most staggering were the intricately hand-carved wooden borders that framed each entryway, a true artistic masterpiece of deer, birds, and flowers. 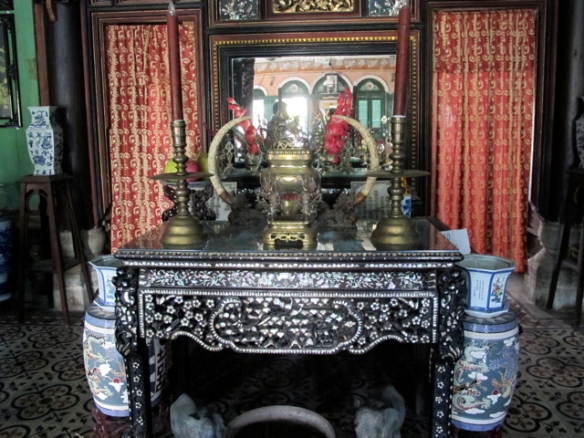 I wondered aloud how the owners had made their fortune to pay for such luxurious things, assuming my cousin would translate for our guide. “Our family were rice and salt merchants,” she replied in perfect English, with clean diction. With surprise, we learned that the woman, whose name is Lien, is a retired English teacher. The house belonged to her own family, who had lived in the area for six generations since the 18th century.

Our visit suddenly became infinitely more personal—a trip to someone’s home rather than a stuffy museum. Lien was delightful: gray hair pulled back in a neat bun, graceful features, soft eyes, a kind smile that revealed a few gold teeth. She seemed like the perfect grandmother. 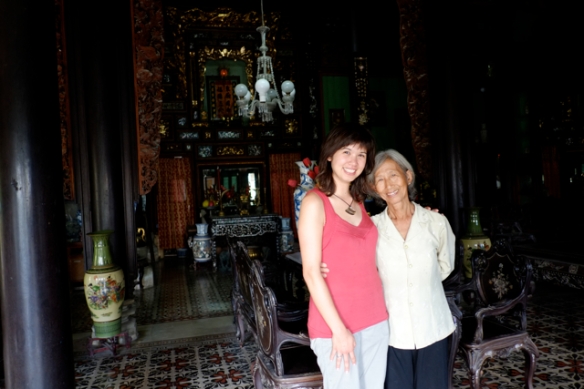 Lien, a descendant of the house’s original owners, is worth the visit on her own! Photo by Bao Quan Nguyen.

She and about 10 members still live in rooms behind the main house, but in the old days, she said, there were many more. The land surrounding the house used to be much bigger too. Now most of the family lives far away, and I sensed a grandmother’s sadness when she said this. In a framed group photo of a family reunion at the house, Lien is positively beaming with a small child in her lap.

It was easy to imagine the family dissipating over the years, the fortune crumbling, the precious artifacts and tracts of land sold off one by one to pay for debts, taxes, bribes. One black-and-white photo in a booklet Lien gave me showed a baby posed between two absolutely enormous elephant tusks from the family collection. The caption contains a poignant parenthetical: (missing already). The remaining family treasures are now collected into the house’s main room in a shadow of its former glory—with a single woman invested in keeping its memory alive. Perhaps I identify with Lien because I am definitely one nostalgic for the past, someone keen for preserving history who often cringes at modernization. 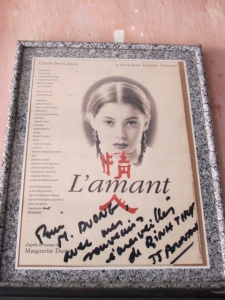 I found myself taken with a photo of the actress Jane March hanging on the wall. A scene from the racy 1992 French film “The Lover,” which I hadn’t heard of, was filmed at the house. The lead actress is a mix of Vietnamese and European ancestry, though I was disappointed to learn that she plays a French girl in the film. The film is set in 1929, during Vietnam’s French colonial period—it would seem only fitting to have a character that acknowledged intermarriage. During my time here, I sometimes find myself wondering by the shape of someone’s nose or other facial features whether they have any European or American blood. I studied Jane March’s face with particular interest. I know many multiracial people, but have met only two or three that are specifically part Vietnamese like me. As a minority among minorities, there’s something to be said for finding people who “look like you”—in the sense that they have similar roots. 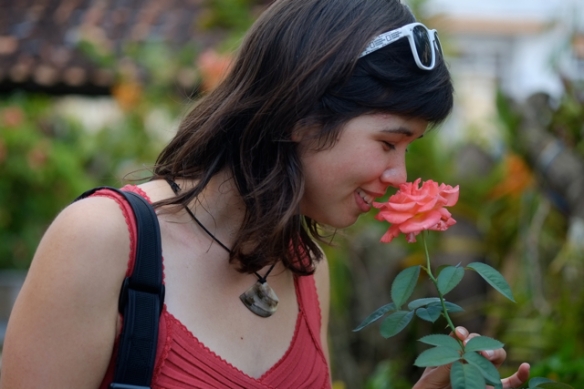 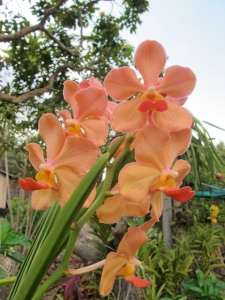 I asked Lien how many visitors she gets at the house. Some days are busy when a tour group might come, she said, but most weeks are like today, only a few visitors if any. On our way out, I gave her a small donation to thank her for opening the house, about $5. She was so pleased, and asked if we would like to see the garden. My favorite photography subjects are flowers, so here I was in bliss. So many bright tropical orchids!  Wandering through the garden reminded me of my own Vietnamese grandmother’s, beautiful and slightly cluttered and in need of repair. A cat and some bony kittens stared at us with skittish eyes.

Lien came out to give me a small booklet on the history of the house, written in Vietnamese, English and French. She had even penned a dedication in it. She returned to the house, then ran back out, smiling and flustered because she realized she had mixed up “From” and “To” in the dedication. Endearing. Then, as we were leaving, she ran out again to give us a bag of sweet cooked plantains. A woman truly after my own heart.

Consider this my full endorsement for visiting the Ancient House if you should find yourself in Can Tho, Vietnam—if for no other reason but to meet its charming proprietor. 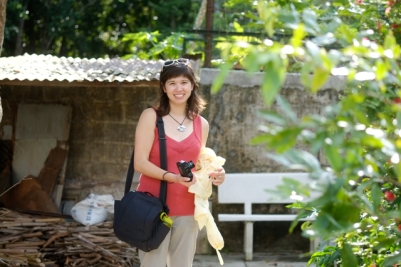 Happy photographer in the garden! Photo by Bao Quan Nguyen. 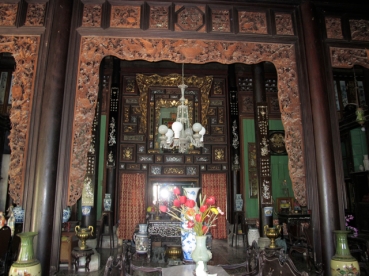 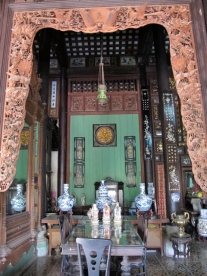 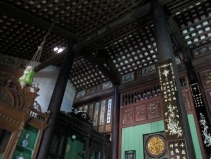 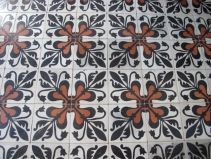 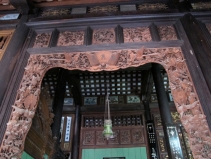 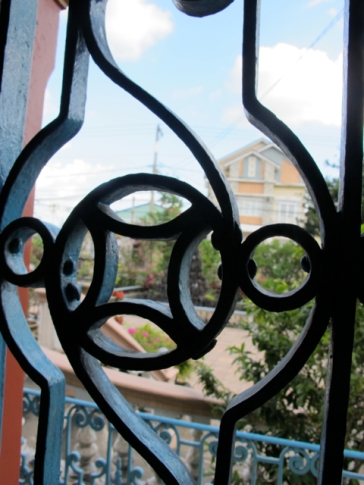 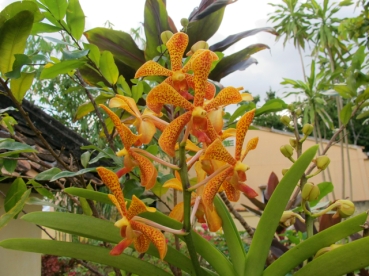 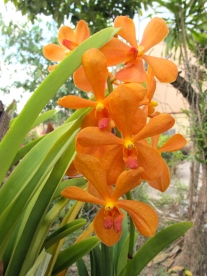 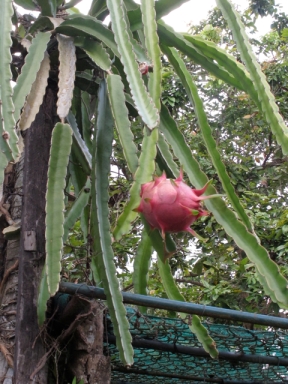 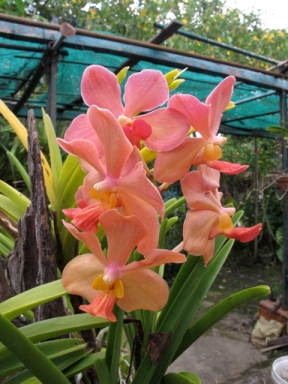 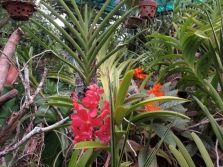 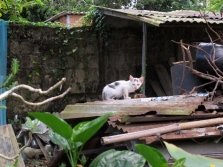 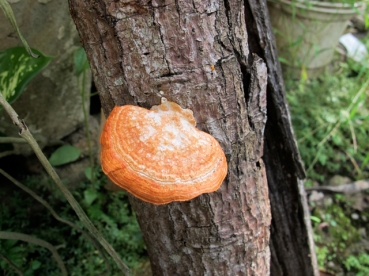 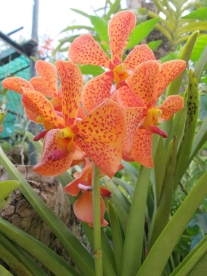 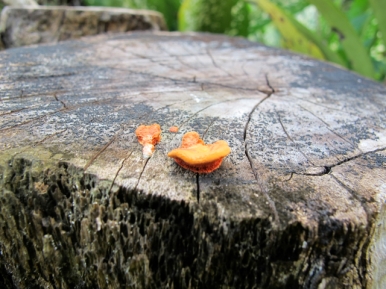 1 thought on “The Ancient House”