Well, you can disregard the report in my previous post of this season’s cooler temperatures. After I experienced one day of refreshingly chilly weather, the heat has flipped back on and stayed there. People are remarking that it’s turned warmer earlier than usual this year. “You’ll learn to love an air conditioner,” one friend said. One of the traditions of Lao New Year that I’m looking forward to experiencing next month is people relieving the oppressive heat of April by throwing water on each other. I’ve heard more than one proposition that maybe this practice ought to start a month early this year. 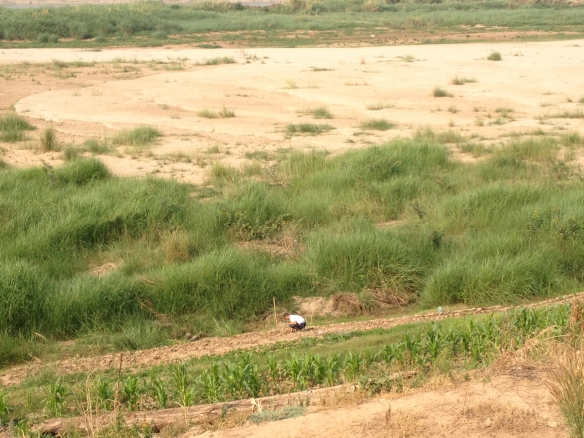 Tending a riverside garden by the Mekong

I am still fascinated by the low water level of the Mekong River in the dry season. One product of this recession is I’ve noticed people tending gardens on the exposed land along the river. These riverside gardens are an important seasonal component of Lao culture that cycles with the river. When the water level is high during the rainy season, fishing is in full swing. When the river drops, people plant gardens on the fertile riverbank soil. My FISHBIO colleagues have taken photos of riverside gardens in Lao villages – it was interesting to see some for myself right in the city of Vientiane. 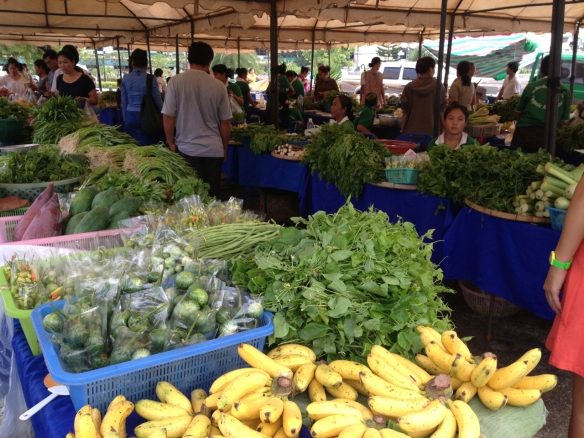 Farming is a very important part of life in Laos, and farming and fishing often go hand in hand. It seems like a lot of people are part farmer, part fisher, depending on the season. Rice is the primary crop in Laos, and other important crops include corn, sugar cane, sweet potatoes, soybeans, and various fruits and vegetables. Coffee is also grown in the southern part of the country. At the organic farmer’s market (where I think it’s more likely to find crops grown locally rather than imported) I’ve seen bananas and many vegetables and herbs, including cucumbers, pumpkins, okra, and leafy greens.

Fishing in a side channel

Despite the lack of water, people are still fishing in the cut-off side channels, searching for whatever hapless fish are trapped in what essentially amount to large puddles. I can only guess as to their success. The Mekong is known for its highly variable water flow between the rainy and dry seasons, so I shouldn’t be so surprised by its contraction. But seeing so much dry land is a sight I haven’t quite gotten used to.

Coupled with the heat and the low water is the dust. If it seems dusty here in the capital, I can only imagine how it must be in the villages, with a lack of paved roads and an abundance of red dirt. Lots of plants and trees here look like they’ve received a dusting of cinnamon. When I asked a friend about the haziness of the sky, she thought it was a result of the dust ­– I suppose that’s a bit more comforting than my smog hypothesis, though my guess is the true cause is probably a mix of both. 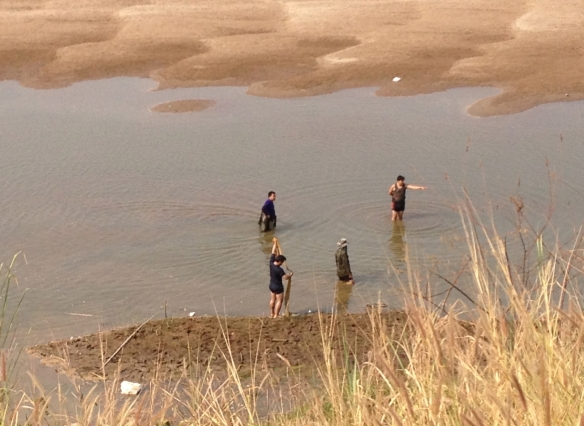 Fishing in a side channel

Leaving a drought-afflicted state to land in another country’s dry season heightens my constant thirst has me craving rain. I’m thankful to hear California is finally receiving some much-needed rain and snow back home. I’m increasingly reminded how precious water is – especially when you have to drink it from a bottle. But more on that later.